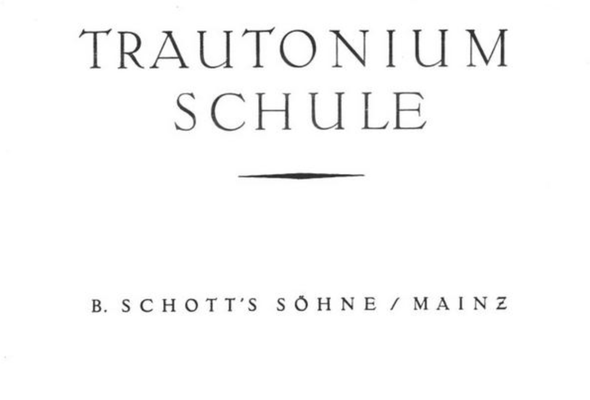 A kipp generator aids in the production of sound on the Trautonium (a resonant circuit with glow lamp, later thyratron tubes from AEG), which then produces an overtone-rich sawtooth waveform. The frequency of the waveform is controlled by a resistor, which is built in the form of a manual attached to a wire. The position of the finger on the wire, i.e. where it puts pressure on the contact rail that runs underneath, determines the pitch. Seamless alterations are also possible; there are specific keys that guide the performer. All Trautonium models built beginning in 1934 have two manuals at their disposal.

One idea for the formation of sound that would greatly impact future music and was included on the Trautonium from the very beginning consists in the creation of artistic formants (frequency ranges, in which the overtones of a sound, conditioned by the tone generator’s own resonance, are particularly strong). The formant ranges are produced with the help of the resonance of a filter circuit and can be altered during performance. The idea for subharmonic mixtures goes back to Friedrich Trautwein, but Oskar Sala was the first to test it out with his instrument in 1934. At the time, two further sawtooth wave generators were attached to the main pitch generators, which were controlled via the wire-manual. These sawtooth wave generators produced the corresponding subharmonic frequencies (integer divisors of the frequency of the main pitch generators).

In this manner, one could play intervals, and then later chords and organ-like mixtures, which were based on the so-called subharmonic progression, a speculative inversion or mirroring of the overtone series. The interval relations produced by this process naturally correspond not to well or equal temperament but rather to pure intonation, one factor which the performer has to take into consideration, if for example he or she wants to play a chord on a manual and in addition to that a melody on the other. The Trautonium, as a “fretless string instrument,” was destined to deal with subharmonic sounds. Another of the Trautonium’s many achievements is the excellent control over the dynamics of individual attacks. Oskar Sala found an idiosyncratic solution to this prob- lem in the 1930s, which was also used by Peter Pichler for his instrument. The manuals are spring-loaded and respond to a touch-sensitive liquid resistor. The tone begins only when the string is pushed down and touches the contact rail in such a way that the contact rail gives way. Volume and timbre can also be altered in the same way and at any time, even in the middle of sustained tones. Further, two pedals establish the base volume, the octave position and the patch. With the exception of a few models of the Trautonium, namely the devices built before 1935 by Telefunken for home use, the instrument’s many variations are one- offs. In 1934, Oskar Sala completed his dual-manual Radio-Trautonium [Rundfunktrautonium], which was already equipped with the addition of two subharmonic tones. In 1939, the portable Concert-Trautonium [Konzerttrautonium] was created for stage use.

From 1948 to 1952, Sala worked on an instrument, in which he continued to pursue the principle of subharmonic mixtures with great diligence and which would go down in history as the Mixture-Trautonium. Now, four subharmonic sounds could be added to one fundamental tone (the concept “overtone” would be closer but in fact incorrect). However, these sounds were now independent and freely selectable all the way up to the twentieth subharmonic. (Today, Peter Pichler’s Mixture-Trautonium can actually reach the thirty-second subharmonic.) Oskar Sala composed and played this instrument until 1987. In 1988, he presented the public with a new device, which was constructed as a team project with students from the Technical University of the German Federal Post in Berlin and led by professors Hans-Jörg Borowicz, Dietmar Rudolph and Helmut Zahn. This “Mixture-Trautonium after Oskar Sala” combined the traditional playing technique with wire-manuals and the possibilities for sound-shaping, which had been preserved from the original, with the advantages of micro- electronics. In 2004, it became property of the Berlin Musical Instrument Museum.

Peter Pichler at his Mixture Trautonium

The music theater piece "Reunion in Trautonia" by Peter Pichler about a fictitious meeting of the three main Trautonium-developers Hindemith, Trautwein and Sala.